Wales made such a success of hosting a major European chefs’ conference at the weekend that the nation is to consider bidding for a global event in the future. 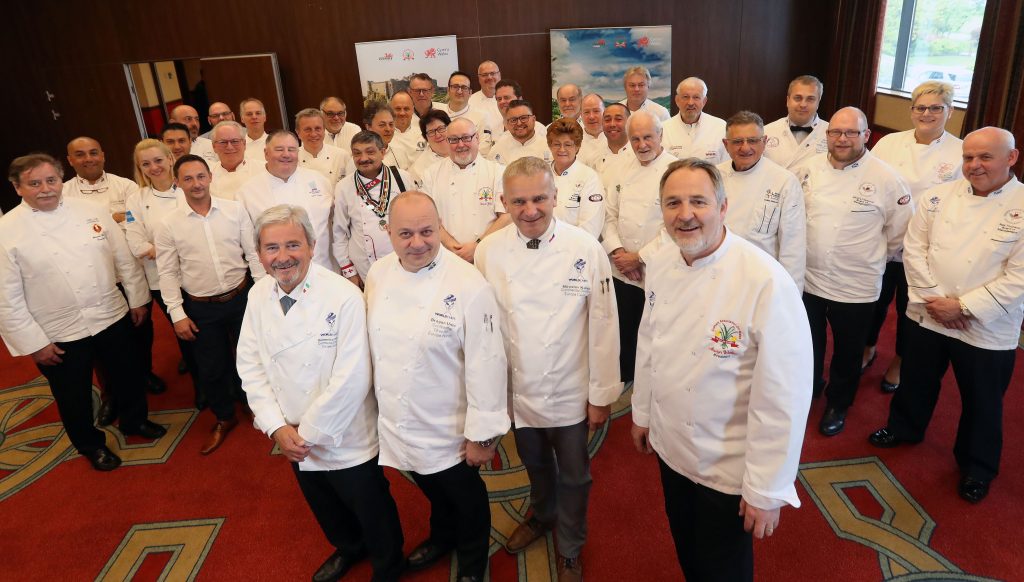 The Culinary Association of Wales (CAW) hosted delegates from 20 countries at the World Association of Chefs’ Societies (WACS) European conference at the Celtic Manor Resort on Sunday and Monday with support from the Welsh Government and Visit Wales.

Arwyn Watkins, CAW president, said it was a huge honour to welcome the conference to Wales and referred to the £83.7 million project at the Celtic Manor Resort to build an international convention centre, which would be open in 2019. The centre, which will be delivered and managed by a joint venture company owned by the resort and the Welsh Government, will be able to cater for banquets with up to 3,500 guests.

“The Celtic Manor Resort would like the Culinary Association of Wales to consider, in the future, hosting the WorldChefs congress, possibly in 2022 or 2024,” he told delegates. “It is something that we are seriously considering, but would rely on your support.”

He said the European conference, which had been planned for two years, had made a very big impression on the visiting chefs and he was delighted by the positive feedback he had received.

The CAW had set out to show the important partnership between chefs and the food and drink supply chain in Wales whilst also exposing the European delegates to Welsh culture. “It just goes to show what you can achieve when you work hand in hand with producers,” he added.

A Welsh food and drink showcase was displayed throughout the conference with a team of staff representing the producers available to answer questions and provide samples.

Michael Bates, the Celtic Manor Resort’s executive chef, prepared an eye-catching selection of food for lunch and a dinner celebrating the best of Welsh ingredients when Llantrisant Male Voice Choir entertained the guests.

Dragan Unic, from Sweden, WACS’ continental director for Northern Europe, declared: “This is one of the best conferences that we have ever held. I know all the guys (delegates) really appreciated it as well.

“I think the lunch on Sunday was the best we have ever had and the dinner was also great. The venue is magnificent.”

Miroslav Lubek, from the Czech Republic and Domenico Maggi, from Italy, the continental directors for Central and Southern Europe respectively, also praised the Welsh hospitality and venue. “The conference was fantastic and the people here are super,” said Mr Lubek.

Mr Maggi, whose wife is Welsh, said: “I would like to congratulate the Chefs Association of Wales because they have put on an event of the highest standard with great attention to detail.

“The food was brilliant and this makes me very proud because I feel half Welsh. The conference shows that well organised small countries can do an even better job than big countries.

“I think being a small country sometimes allows you to create a team spirit of collaboration and that shone out with everything that was done for this conference. It was really fantastic and an example for others to follow.”

Brian Cotterill, British Culinary Federation life president, was also impressed. “Congratulations to the Culinary Association of Wales on organising a great conference,” he said. “They have done a splendid job, which is very much appreciated.”

He said the food and drink sector in Wales employs 223,000 people, contributes £17 billion a year to the economy and is more than half way towards achieving the Welsh Government’s target of 30% growth or an extra £7 billion by 2020.

Details were revealed at the conference of the WACS Global Chefs Challenge to be held in Prague from October 6-8. Wales will be represented by Simon Crockford from the Celtic Manor Resort, who became National Chef of Wales champion earlier this year.

He will be joined in Prague by Junior Chef of Wales Steffan Davies from Gidleigh Park, Exeter, who will compete in the Hans Bueschkens Young Chefs Challenge. They will each be allowed to a commis chef and the CAW will be invited to nominate a judge for the competitions jury.

Both competitions will challenge chefs to prepare three courses for six people, with a starter based on seabass and scallops, the main course based on veal loin and fois gras and dessert comprising one baked item, chocolate and fruit. The only difference between the competitions is that the dessert for the Young Chefs Challenge must include an element with 40 per cent chocolate, fruit and sauce.

Delegates were encouraged to support the Nestle-sponsored International Chefs Day on October 20, which will see chefs around the world work with children on the theme ‘Superheroes’ to promote healthy eating.

At a time when politicians are locked in debate about a hard or soft Brexit as the UK negotiates its exit from the European Union, Mr Watkins said the conference could not have come at a better time for Welsh food and drink producers.

“Any opportunity Wales gets to speak to our European counterparts has got to be advantageous,” he said. “It’s important to keep the dialogue open during the Brexit negotiations.

“The more that we can get chefs’ leaders from across Europe to recognise the quality of food and drink from Wales, the better chance we have of keeping that supply line alive in the future.

“A lot of countries represented at the conference are not members of the European Union and are therefore likely to be targets for future trade agreements.”